A golden tribute to the 1919 Ross Smith First Flight from England to Australia Vignette, celebrating one of the greatest achievements in aviation history.

In 1919, Australian aviator Ross Smith and his brother Keith won the England to Australia Air Race in their Vickers Vimy aeroplane. Taking off from London on the 12th November and arriving in Darwin on the 10th December, the journey was the first flight from Great Britain to Australia and represented a major leap forward for commercial aviation.

The flight was also the first airmail run from Britain to Australia. Carrying a bagful of letters that were adorned with the original 1919 Ross Smith Vignette, printed by the Commonwealth Note Printing Branch. 364 vignettes were attached to letters, and it is known that 87 examples were presented to the crew and VIPs. 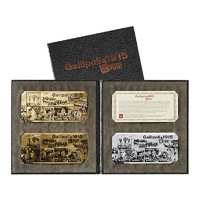