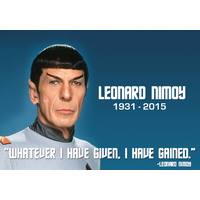 Celebrating one of the best known sci-fi characters

Leonard Nimoy, who died at 83, had a long, prodigious career as an actor, writer, and director. Despite all his other achievements, he will always be known as Mr. Spock, the half-human, half-Vulcan first officer of Star Trek’s Enterprise.

As a Star Fleet Officer in the 23rd century, he served aboard the starship USS Enterprise as Science officer under Captain Christopher Pike, as first officer and science officer under Captain James T Kirk, and as the Enterprise's commanding officer during her tenure as a training vessel. In the 24th Century, Spock became a celebrated ambassador and adviser to the Federation's leadership. He disappeared in 2384 after saving the Federation from a supernova that destroyed Romulus, causing the creation of the alternate reality.