Due to the current high volume of orders, we are experiencing brief delays with some shipments. Most orders should ship within 1-2 business days after being placed. Once your order has shipped, tracking information will be sent to via email. We thank you for your understanding.
Skip to main content 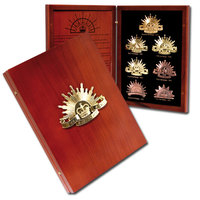 The first Rising Sun Badge appeared in February 1902 after a badge was urgently sought for the Australian contingents raised after Federation for service in the South Africa War, it is widely accepted that the first version was a design by Major General Sir Edward Hutton from the British Army who was the newly appointed Commander-in-Chief of the Australian Forces.  Today's Badge is the seventh pattern to be used and is widely known as the Australian Army Badge.