The Memorial Plaque was issued after the First World War to the next-of-kin of all British and Empire service personnel who were killed as a result of the war.

The plaques about 4.75 inches (120 mm) in diameter, were cast in bronze and came to be known as the "Dead Man’s Penny", because of the similarity in appearance to the much smaller penny coin which itself had a diameter of only 1.215 inches (30.9 mm). 1,355,000 plaques were issued, which used a total of 450 tons of bronze and continued to be issued into the 1930s to commemorate people who died as a consequence of the war.

It was decided that the design of the plaque, was to be chosen from submissions made in a public competition. Over 800 designs were submitted and the competition was won by the sculptor and medallist Edward Carter Preston using the pseudonym Pyramus, receiving two first place prizes of £250 for his winning and also an alternative design. The name Pyramus comes from the story of Pyramus and Thisbē which is part of Ovid's Metamorphoses, a Roman tragedy narrative poem.

This presentation is a replica, the only change is the inscription reads '1914-1918' where the recepients name would normally be inscribed. 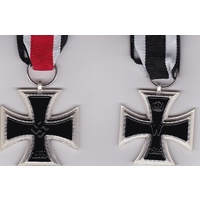 2015 Animals in War Ingot Set incl A Centenary of