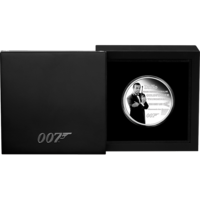 Chosen for the role by producers Cubby Broccoli and Harry Saltzman, who acquired the rights to Ian Fleming’s Bond novels in 1961, his powerful portrayal in Dr. No immediately established the charismatic operative also known as 007 as one of cinema’s most recognisable characters.

Connery’s style, grace and magnetism made a huge contribution to the success of subsequent films, including From Russia With Love, Goldfinger, Thunderball, You Only Live Twice and Diamonds Are Forever.

Followed by five other actors, who each brought their own unique perspective to the character, this coin celebrates Connery as the first, and for many fans, the quintessential Bond. 2020 10c Commemorating the 75th Anniversary of the